2. Use the Planning tool to design the topology (Optional). You can use the Planning tool to design your topology. This tool helps you to identify and define the components in your topology, configure fully qualified domain names (FQDNs), define IP addresses, and provide other information. After you specify the information in the Planning tool, it creates a Microsoft Office Visio diagram of your topology. The use of the Planning tool is optional. However, using it can simplify the planning and deployment processes. This is because the information you export from it to Topology Builder automatically populates the information that Topology Builder requires for deploying the components.
3. Publish the topology. In a Lync Server 2013 Enterprise Edition, the published topology XML document is stored in the back-end database that supports the first front-end server pool. In the Lync Server 2013 Standard Edition, the topology is stored in the SQL Express Edition database. Remote access is not enabled by default. However, you can change this during the setup process.
4. Set up Lync Server 2013. After you publish the topology document to the database, you need to run the local setup of the first Lync Server 2013 server again. After you complete this installation, the setup routine provides a reference of a Service Connection Point (SCP) object from Active Directory.  This object points the setup to the Central Management Database. You should install the Lync Server 2013 component as defined in the topology document and perform the activation of services and roles of the component accordingly. 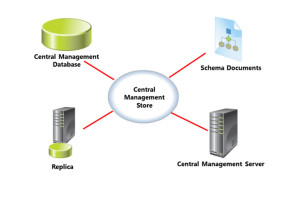 Overview of the Central Management Store