Using PowerShell 3.0
Because both the Lync Server Management Shell and the Lync Server Control Panel are built on the Windows PowerShell 3.0 command-line interface, being comfortable in working with the syntax and capabilities of PowerShell is important. If you are new to PowerShell, but familiar with scripting, an overview of how to use PowerShell 3.0 with Lync Server 2013 will be helpful.
Why Use PowerShell?
PowerShell is built on the Microsoft .NET Framework common language
runtime (CLR), and PowerShell accepts and returns .NET Framework objects. By using product-specific commands, PowerShell gives you access to the file system on the computer and enables you to access other data stores, such as the registry and the digital signature certificate stores, just as easily as you can access the file system. It is designed specifically for systems administrators to make configuration and management tasks easier.
Using PowerShell Cmdlets
As previously mentioned, each PowerShell cmdlet consists of a verb followed by a dash, and then followed by a noun as shown in the following example.
Get-Help
If you want to receive help on a specific cmdlet, type the following.
Get-Help New-CsVoicePolicy
This command returns the most commonly-sought help for creating a new voice policy.
For more detailed help on a topic, you can add a parameter, preceded by a dash, as shown in the following example.
Get-Help New-CsVoicePolicy -Examples
For all available help on a topic, use the parameter –Full.
Note: You can get help on each cmdlet directly from the command line and from the
Lync Server 2013 Help file. There are two specific Help files available for cmdlets—RTCCmdlets.chm and RGSCmdlets.chm.
Using Cmdlet Parameters
A parameter is a way of adding additional information to a cmdlet, and limiting the amount of
information that is returned. For example, if you want to find all the services running on a particular server, type the following command.
Get-Service
If you want to return only the Lync Server 2013 services and their active status, type the following command.  Get-CsWindowsServic 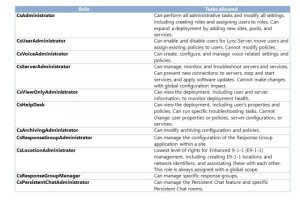