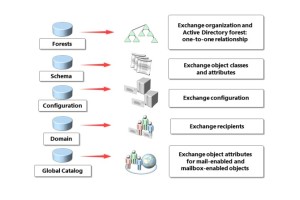 Host Records
Host records provide host name to IP address mapping. Host records are required for each domain controller and other hosts that need to be accessible to Exchange Servers or client computers. Host records can use Internet Protocol version 4 (IPv4), which are A records; or Internet Protocol version 6 (IPv6) records, which are AAAA records.
MX Records
A Mail Exchanger (MX) record is a resource record that allows servers to locate other servers to deliver Internet email by using the Simple Mail Transfer Protocol (SMTP). An MX record identifies the SMTP server that will accept inbound messages for a specific DNS domain. Each MX record contains a host name and a preference value. When you deploy multiple SMTP servers that are accessible from the Internet, you can assign equal preference values to each MX record to enable load balancing between the SMTP servers.
You also can specify a lower preference value for one of the MX records. All messages are routed through the SMTP server that has the lower preference value MX record, unless that server is not available.
Note: In addition to SRV, Host, and MX records, you also might need to configure
Sender Policy Framework (SPF) records to support Sender ID spam filtering. In addition, some
organizations use reverse lookups as an option for spam filtering, so you should consider adding reverse lookup records for all SMTP servers that send your organization’s email.
Software Requirements for Exchange Server 2013

However, there are additional components that you should install manually. These components, freely available to download from Microsoft, include:
• Microsoft .NET Framework 4.5 (only for Windows Server 2008 and 2008 R2).
• Windows Management Framework 3.0 (already included with Windows Server 2012).
• Remote Server Administration Tools (RSAT) for AD DS (can be installed with Server Manager).
• Microsoft Unified Communications Managed API 4.0, Core Runtime 64-bit.
• Microsoft Office 2010 Filter Pack SP1 64-bit or Microsoft Office 2013 Filter Pack.
• Exchange Server Updates for Knowledge Base articles KB974405, KB2619234, and KB2533623 when installing Exchange Server 2013 on Windows Server 2008 R2.
You also should ensure that the Task Scheduler service is enabled and running on the server where you plan to install Exchange Server 2013. 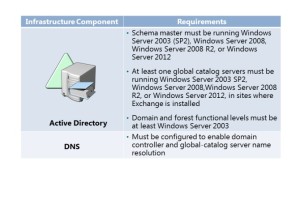 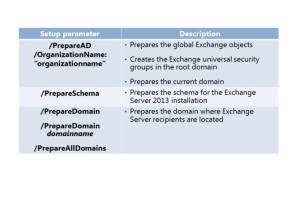 You can prepare your AD DS by running the Exchange Sever 2013 Setup Wizard with a user account that has the permissions required to prepare Active Directory and the domain. To prepare the AD DS schema and configuration partition, you must use an account that is a member of the Schema Admins and Enterprise Admins groups. By using this type of account, the wizard automatically prepares Active Directory and the domain.
Alternatively, you can also prepare AD DS for Exchange Server by running the Exchange Server 2013 setup utility from the command line. If you want to prepare the AD DS schema, and upgrade it to a version supported by Exchange Server 2013, you should run either of the following setup commands:
setup /PrepareSchema or setup /ps. To execute this command, you must also be a member in the Enterprise Admins or Schema Admins groups.
This command performs the following tasks:
• Connect the Exchange Server to the schema master domain controller.
• Import LDAP Data Interchange Format (LDIF) files to update the schema with Exchange Server 2013 specific attributes.
• Set the schema version (ms-Exch-Schema-Version-Pt) to 15132.
Note: You can also prepare the schema as a part of the PrepareAD procedure, which is
described below.
To prepare AD DS objects and the AD DS configuration partition for Exchange Server 2013, you should run setup with the /PrepareAD switch, by executing the following command:
Setup.exe /PrepareAD /IAcceptExchangeServerLicenseTerms /OrganizationName:”Name of
Organization”
This command performs the following tasks:
• Creates the Microsoft Exchange container if it does not exist; the container is created under
CN=Services,CN=Configuration,DC=<root domain>.
• Verifies that the schema has been updated, and that the organization is up to date, by checking the objectVersion property in Active Directory. The objectVersion property is in the CN=<your organization>,CN=Microsoft Exchange,CN=Services,CN=Configuration,DC=<domain> container. The objectVersion value for Exchange Server 2013 is 15448.
• Creates all necessary objects and containers needed for Exchange Server 2013, under
CN=<Organization Name>,CN=Microsoft Exchange,CN=Services,CN=Configuration,DC=<root
domain>.

• Creates the default Accepted Domains entry if it does not exist, based on the forest root
namespace, under CN=Transport Settings,CN=<Organization Name>,CN=Microsoft
Exchange,CN=Services,CN=Configuration,DC=<root domain>.
• Assigns specific permissions throughout the configuration partition.
• Imports the Rights.ldf file. This adds the extended rights required for Exchange to install into
Active Directory.
• Creates the Microsoft Exchange Security Groups OU in the root domain of the forest, and assigns specific permissions to this OU.
• Creates the management role groups within the Microsoft Exchange Security Groups OU.
• Adds the new universal security groups (USGs) that are within the Microsoft Exchange
Security Groups OU to the otherWellKnownObjects attribute stored on the CN=Microsoft
Exchange,CN=Services,CN=Configuration,DC=<root domain> container.
• Creates the Unified Messaging Voice Originator contact in the Microsoft Exchange System Objects container of the root domain.
• Prepares the local domain for Exchange Server 2013.
To perform this command, you must be a member of Enterprise Admins security group, and you must run this command on the computer that is in the same domain as the schema master domain controller.
If you have more than one domain, you should wait for a period of time after running this command, so that changes performed to AD DS are replicated to all other domains and domain controllers.At the end of this process, you should execute the setup /PrepareDomain command in each domain where Exchange recipients will be located. You do not need to run this command in a domain where you ran setup /PrepareAD.
Alternatively, you can also run setup /PrepareDomain:<FQDN of domain you want to prepare> to prepare a specific domain, or you can run setup /PrepareAllDomains or setup /pad to prepare all domains in your organization.
This command performs the following tasks:
• Creates the Microsoft Exchange System Objects container in the root domain partition in AD DS, and sets permissions on this container for the Exchange Servers, Exchange Organization Administrators, and Authenticated Users groups.
• Sets the objectVersion property in the Microsoft Exchange System Objects container under DC=<root domain>. This objectVersion property contains the version of domain preparation. The version for Exchange Server 2013 is 13236.
• Creates a domain global group called Exchange Install Domain Servers in the current domain.
• Assigns permissions at the domain level for the Exchange Servers USG and the Organization
Management USG.
• After all of these commands are successfully completed, your AD DS is ready for Exchange Server 2013 installation. You can check if preparation went well, by performing the following tasks: In the Schema naming context, verify that the rangeUpper property on ms-Exch-Schema-Version-Pt is set to 15132.
• In the Configuration naming context, verify that the objectVersion property in the CN=<your
organization>,CN=Microsoft Exchange,CN=Services,CN=Configuration,DC=<domain> container is set to 15448.
• In the Default naming context, verify that the objectVersion property in the Microsoft Exchange System Objects container under DC=<root domain is set to 13236. 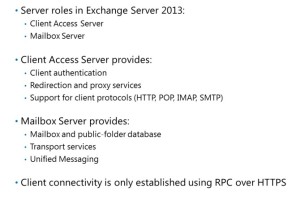 Exchange Server 2013 is available in both the Standard Edition and Enterprise Edition. The
Standard Edition should meet the messaging needs of most small and medium corporations,
but it also may be suitable for specific server roles or branch offices. The Enterprise Edition, designed for large enterprise corporations, enables you to create additional databases, and includes other advanced features. The main difference between Standard and Enterprise versions is that Enterprise version supports up to 50 mailbox databases while with Standard version you can create up to five databases. The version used is determined by product key that you enter when activating your Exchange installation. You should also make sure that you select the appropriate version of client access license (CAL) from the following options:
• Exchange Server Standard CAL. This license provides access to email, shared calendaring, Outlook Web App, and ActiveSync.
• Exchange Server Enterprise CAL. This license requires a standard CAL, and provides access to
additional features such as unified messaging, per-user and per-distribution-list journaling, managed custom email folders, and Microsoft Forefront® Endpoint Protection for Exchange Server.In general, there are three deployment scenarios that you can choose from, including:
• Single server deployment. In this scenario, you deploy both Exchange Server roles on a single server. This scenario is appropriate for small organizations with limited resources. Deploying all Exchange Server services on a single server has several drawbacks. These include having a single point of failure for your whole messaging system, and not having any high-availability options. If you choose to have a single-server Exchange deployment, it is recommended that you deploy Exchange Server inside a virtual machine, and that you keep that virtual machine highly available or at least replicated to another Hyper-V® in Windows Server 2012 host. This will provide you with high availability and redundancy for critical Exchange services.
• Multiple server deployment. In the multiple-server deployment scenario, you usually install the Client Access Server role and the Mailbox server role on separate servers, or you install more than one server with both roles installed. This requires that you provide at least two virtual or physical machines for the Exchange Server deployment. In scenarios where you also want to provide high availability, you should add more machines to build the Client Access load balancing cluster and DAGs. You cannot use DAGs and network load balancing (NLB) on the same set of machines. To achieve full redundancy for Exchange Server, you need at least four servers for Exchange, and at least two domain controllers.
• Hybrid deployment. A hybrid deployment provides the ability to extend on-premises Exchange Server functionality to the cloud. In this scenario, you connect your AD DS and Exchange Server with  Microsoft Office 365. This allows you to move some of your Exchange resources to Office 365. A  hybrid deployment also can serve as an intermediate step prior to moving completely to an Exchange Online organization.
Exchange Server 2013 Hybrid Deployment with Office 365
Office 365 is a suite of four Microsoft services that are now available in an online version: Exchange Online, Lync® Online, SharePoint® Online, and Office Professional Plus. It is a subscription-based service that features various pricing options. 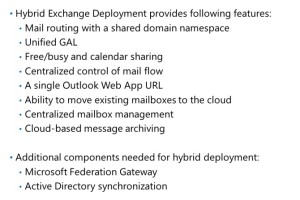 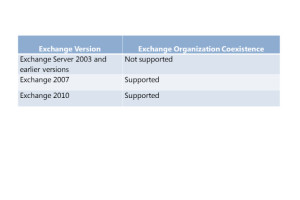